Apr 28, 2012: The day Antichrist Obama said, "I WILL WIN THE WAR ON CHRISTMAS."
Apr 21, 2012: I had a CREAM of seeing a Cruise Ship departing from California on the Pacific Ocean, going down South America, around Argentina, up to Brazil on the Atlantic Ocean and stopping south to the Equator. Then, I saw a Japanese military Base being set up along the ship's route.
4/24, 2012: I had a DREAM of being close to the sea early in the morning while still dark. I saw a small boat coming ashore with Antichrist Obama standing up in the middle of the boat. When people saw him leaving the boat to come onto the shore, they panicked and started running for their lives. I started running, as well, but the Antichrist began chasing after me. The dream started HERE (in the NEW world) and, I do not know HOW, it ended up in Jerusalem, Israel. I do not know how I was able to cross the ocean RUNNING and how I was able to get to Israel, which is a country I have never been in my life.
When I got to Jerusalem, I managed to get into an apartment on the 2nd or 3rd floor through the balcony. Once in the apartment, I saw many small porcelain (ceramic) bowls on top of a table, giving me the impression that whoever lived there was a POTTER (a craftsperson who shapes pottery on a potter's wheel and bakes them it a kiln, a CERAMICIST.) I looked through a window and saw Antichrist Obama standing over a little bride that connected two streets, looking toward the apartment I was in.
Then, I went down the stairs and exited through the back door. Once on the street, I started running WEST, passing behind the little bridge the Antichrist was standing on, but he did not see me.
I continued running, going WEST, as fast as I could. END of DREAM.
Apr 25, 2012: The next day, I had another DREAM. This time around I found myself walking WEST, in the middle of the night, on a muddy road with lots of people and many children. I saw people taking mud to use as bait for fishing. When I got to my final destination, I came to a marina where I saw a few damaged boats, some of them on the sand, as if they had been pushed on shore by a big wind. I was ready to "go fishing" using mud for bait. I do not know it for sure, but I'm assuming the beach I came to is located in CALIFORNIA, which is the closest state on the other side of the U.S. I could get to walking straight from EAST to WEST. END of DREAM.
Apr 26, 2012: A watchman got this "message": The BRIDE has been examined and has been approved. She will be RAPTURED soon.
Apr 29, 2012: I had the DREAM of coming to a tall building that was partially destroyed (because of mother nature's causes) and empty. I noticed that the main beam on the top (roof) of the building was in very poor condition, ready to collapse. I was standing on the first floor, close to the entrance door and noticed a big wind blowing, water flooding the ground outside the building and lots of people buried alive on the mud. I got out the building and went to another are nearby and found a big brown towel (the size of a beach towel) on the mud. Mud was everywhere, LOTS of mud. END of DREAM.
Apr 30, 2012: I had the DREAM of my mother serving food for many people. Somebody asked her how much she'd charge for cooking a GOAT.

- 2016
April 19, 2016: The first day of the 13-day Satanic ritual days for the “Blood Sacrifice To The Beast.”
April 19 is the first day of the 13-day Satanic ritual day relating to fire - THE FIRE GOD, BAAL, or MOLECH/NIMROD (the Sun God), also known as the Roman god, SATURN (SATAN/DEVIL.)
This day is a major human sacrifice day, demanding blood and fire sacrifice with an emphasis on children.
This day is one of the most important human sacrifice days for Satanists and others. Some very historic events occur on and around this time period. FIRE SACRIFICE is required on April 19.
THE THIRD WEEK OF APRIL IS A VERY SCARY TIME FOR AMERICA - Vice News
Here are a few examples: https://www.reddit.com/r/exjw/comments/bf383g/fyi_today_april_19th_is_the_first_day_of_the/
Apr 19, 2016: The Replica of the Temple Of Baal and the Palmyra Arch were Unveiled in London.
Apr 19, 2016: That same day, AC Obama departed to Ramstein, Germany at 3:20 pm.
Apr 20, 2016: The next day, Antichrist Obama arrived in Muslim Saudi Arabia for a 2-Day OFFICIAL visit.
Apr. 21, 2016: 2 days after the Temple Of Baal and Palmyra Arch were unveiled, Antichrist Obama arrived in London.
Apr 21, 2016: Pop "legend" PRINCE died at 57.
Apr 22, 2016: Was FULL Moon and Good Friday. Antichrist Obama was scheduled to pass an U.N. resolution against Israel.
Apr. 24: AC Obama was still in Germany to celebrate ARBOR DAY.
Apr 29, 2016: A watchman received this "message": 'TODAY IS WHEN IT WILL BE, THE 7th OF PASSOVER', thus says the LORD.
Apr 30, 2016: Was Antichrist Obama's LAST SUPPER (last White House Correspondents’ Association DINNER.) At the end of his Satanic speech, Antichrist Obama DROPPED THE MICROPHONE.
Apr 29, 2016: A watchman received this "message" from the Lord, "IT’S ALL GOING TO GO DOWN WITH A BANG!"

Apr 22, 2017: The MARCH FOR SCIENCE in Washington, D.C. took place.
Apr 23, 2017: FEMA Operation Gotham Shield started. Ended April 27.
Apr 24, 2017: After being "hiding in plain sight," Antichrist Obama returned to the public spotlight.
Obviously, April is the GAY son of Satan's favorite month for returning to the public spotlight.
Remember April 5, 2022 ?!
Apr 29, 2017: FALSE PROPHET pope FRANCIS 'Peace' trip to ANTICHRISTIAN EGYPT ended.
Apr 22, 2017: In a DREAM, I told my Mother "THE SKY IS DIRTY." She saw a WHITE LINE instead.
Coincidentally, this message was posted yesterday, April 17, 2022 on the Five Doves Forum:
SATAN'S FALL SEEN ON APRIL 7TH? This is PECULIAR, given the month and times we are living in. There is no way this is a contrail. Please see the 1st link from MrMBB333 and the 2nd link holds an article from the Daily Mail, titled "WEIRD CLOUD OVER ALASKA." Luke 10:18 .... anyone? 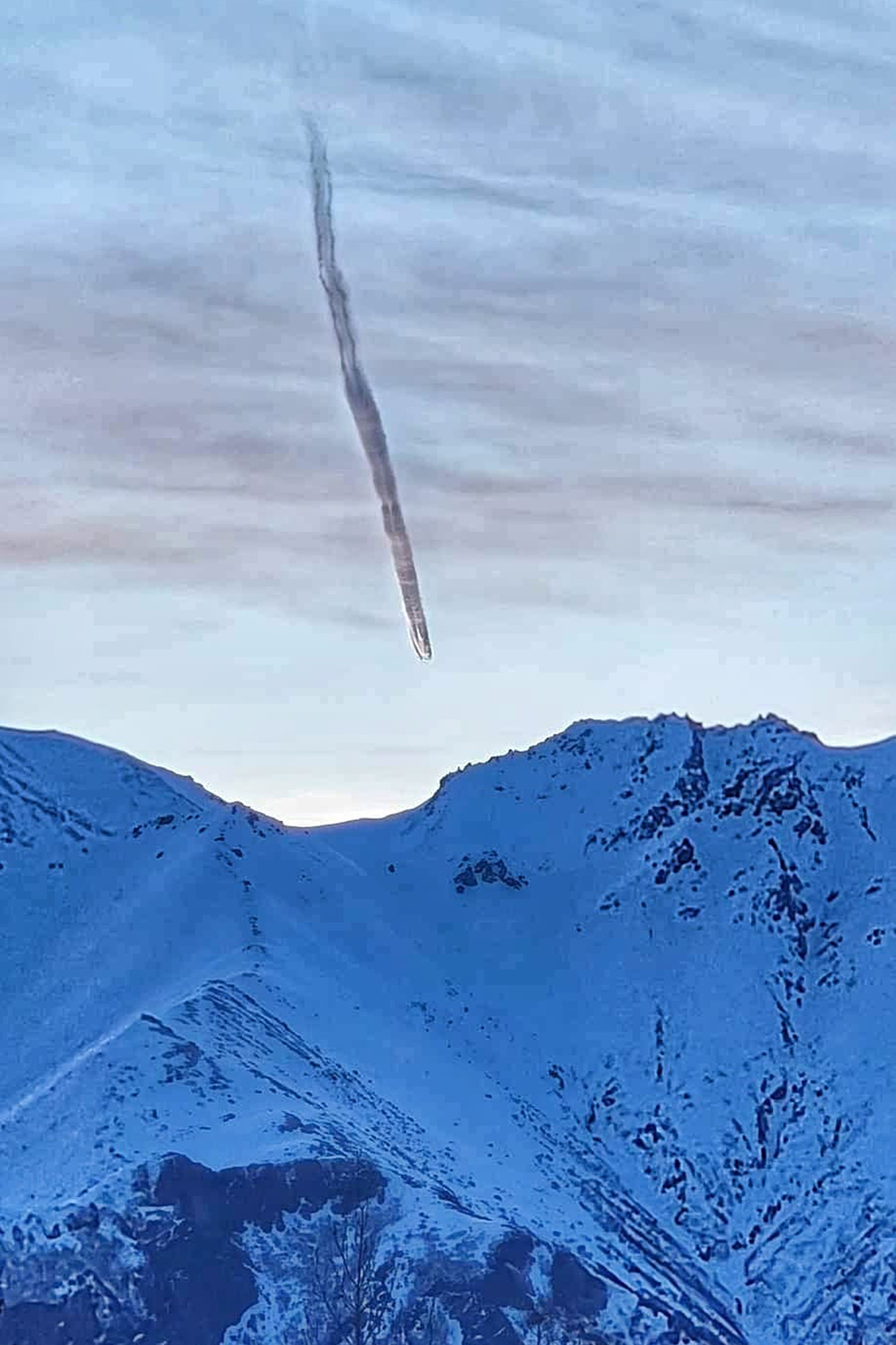 Apr 19, 2021: Puppet O'Biden's VacSINation Drive, "90% of Americans vaccinated by April 19 and 10% by May 1st."
Apr 20, 2021: Minneapolis cop Derek Chauvin was found guilty of murder in the death of the UNCLEAN son of God (BLM DEMON) George Floyd. That evening, puppet O'Biden and Great W.hore Kamala spoke on TV about Nephilim Floyd's verdict a little after 7 PM.
Apr 22, 2021: Was Earth Day. O'Biden hosted leaders from around the NEW world for a virtual summit on "Climate change."
Apr 26-30, 2021: An ASTEROID IMPACT EXERCISE and a PLANETARY DEFENSE CONFERENCE took place.
Apr 27, 2021: Watchman Alfonso Leyson published "SUPER PINK MOON and RAPTURE OF THE BODY OF CHRIST."

- 2022
Apr 15: Coachella (COACH-HELL-A) pagan festival starts. The gates open around 11 am, first band plays at noon. The last show normally ends after MIDNIGHT.
Apr 19-20: Tuesday and Wednesday mornings, RED ANTARES (in the constellation Scorpius) and the Moon.
Apr 21-22: The LYRID METEOR SHOWER peaks on the night of Thursday into the early hours of Friday.
April 22: Is EARTH DAY, a day to honor the Earth and to meditate on DEITY manifesting as MOTHER EARTH (an Occult Goddess.) Festival of Isthar (Babylonian.)
Apr 22-30: International DARK SKY Week. Related to my "DIRTY SKY" DREAM on April 22, 2017 (above)?!
Apr 23: PASSOVER ends at sundown.
Apr 24: The COACHELLA Valley Music and Arts Festival ends.
Apr 27-28: HOLOCAUST MEMORIAL DAY (Yom HaShoah) for Hebrew Year 5782 begins at sundown on Wednesday, 27 April 2022 and ends at nightfall on Thursday, 28 April 2022.
Apr 29: ARBOR Day. Always observed on THE LAST FRIDAY IN APRIL, Arbor Day is a national holiday created to recognize the importance of trees. The most common way people celebrate Arbor Day is to get together in groups to plant trees.
The difference between EARTH DAY and ARBOR DAY is that while Earth Day recognizes humankind's negligence regarding the environment and aims to take steps to correct the imbalance, Arbor Day, while similar in purpose, is one day dedicated to the planting of trees, which in turn lowers the carbon footprint.
Apr. 30: 2-Day BELTANE FESTIVAL starts. WALPURGIS NIGHT in Germany will begin in the evening of Saturday, April 30 and ends in the evening of Sunday, May 1. BELTANE is the Satanic NEW YEAR and it's a time of rebirth. The Beltaine or Beltane Festival (also called Walpurgis Night) is the HIGHEST DAY on the Druidic Witch's Calendar. May 1 is the Illuminati's second most sacred holiday.
Apr 30: A BLACK MOON, the second NEW MOON in the calendar month of April, happening at 4:28pm.
Apr 30: PARTIAL SOLAR ECLIPSE. First of two eclipses taking place during a single eclipse season.
May 4-5: Yom Haatzmaut (ISRAELI INDEPENDENCE DAY) from sundown to sundown on May 4/5.
May 16: TOTAL LUNAR ECLIPSE, the 2nd eclipse two weeks after the Partial SOLAR Eclipse of April 30.

This is all I have, so far, for the rest of the month of APRIL.

Hoping a LEAST one of the "PROPHECIES" or DREAMS referred to in this "conspiracy theory" dairy comes to pass. That's ALL I ask, LORD.

Yes, FATHER, I know the Lord's Prayer does not say: "THY kingdom come; THY will be done in HEAVEN and RUBEN's will be done on EARTH." I know, I know!!! My will should be to shut the HELL up and continue eating LOTS of Satanic KRAP in Your cesspool while YOU decide ENOUGH IS ENOUGH, according to "THY WILL BE DONE ON EARTH AS IT IS IN HEAVEN," right ?!

"IT AIN'T OVER UNTIL YOUR FAT LADY SINGS," Right, FATHER ?!

Last night I had a quick flash vision of a large lady standing up from a piano bench to sing.
You know what they say… "IT’S NOT OVER UNTIL…" 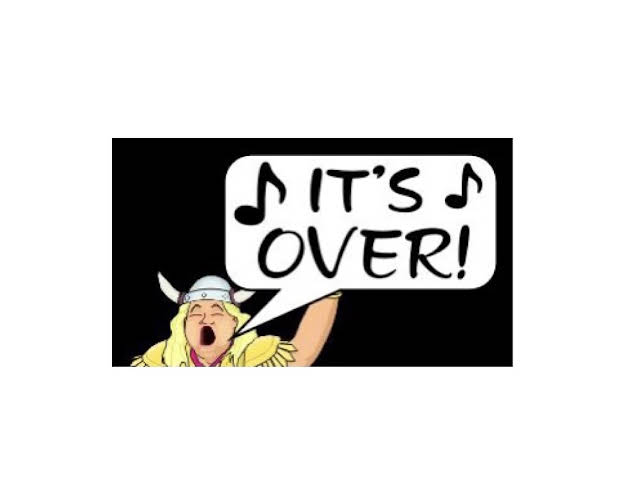 « back
Return to Website  > Index  > Bible prophecy  > Dreams  > Re: There will be an EARTHQUAKE on 16...
Free Forum&nbsppowered by Bravenet