MOST ALL the world is "NOT" WATCHING the prophetic
events AT ALL!!! They are asleep! The TRIBULATION
will wake up MANY but will also DESTROY MANY!

The moon that was JUST BIRTHED will be passing through
VIRGO then "at her feet" / in EVIL SCORPIO by July 10! 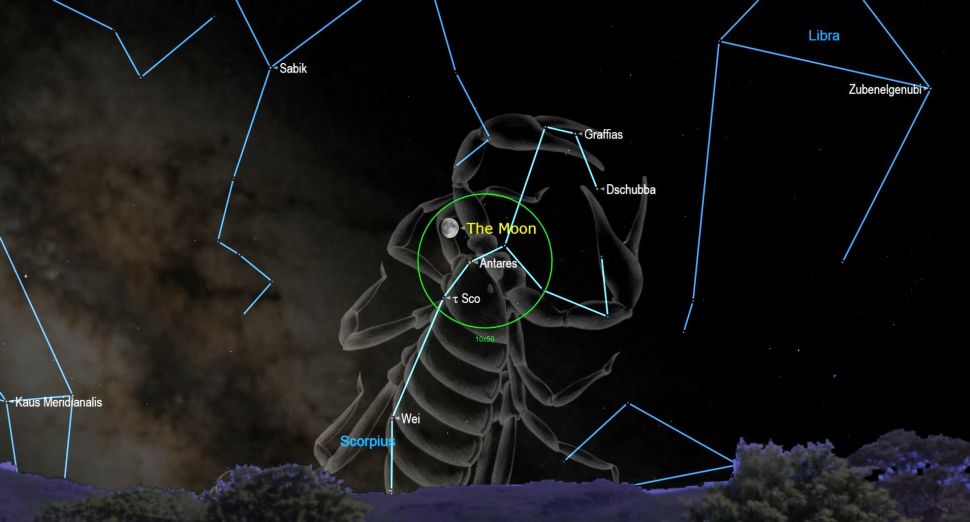 Graphic showing the moon near Antares.The moon will be
visible near Antares on July 10. (Image credit: Starry Night)

On Sunday evening, July 10, while the bright waxing gibbous
moon shines in the southern sky, the very bright, reddish star
Antares will sparkle two finger widths to its lower right
(or 2 degrees to the celestial south-southwest). They'll
be close enough to share the view in binoculars (green circle)
and backyard telescopes at low magnification. Antares marks
the heart of Scorpius. Its name is Latin for "rival of Mars",
referring to its visual resemblance to that planet.

Revelation 13: 1-8 ‘“Then I stood on the sand of the sea. And I saw
a beast rising up out of the sea, having seven heads and ten horns,
and on his horns ten crowns, and on his heads a blasphemous name.
Now the beast which I saw was like a leopard, his feet were like the
feet of a bear, and his mouth like the mouth of a lion. The dragon
gave him his power, his throne, and great authority. And I saw one
of his heads as if it had been mortally wounded, and his deadly
wound was healed. And all the world marveled and followed the
beast.

Just days prior*** to Obama's (AC) election, the Lord spoke
about him FROM HEAVEN!

Daniel 8 (NKJV)
25 “Through his cunning
He shall cause deceit to prosper under his rule;
And he shall exalt himself in his heart.
He shall destroy many in their prosperity.
He shall even rise against the Prince of princes;
But he shall be broken without human means.

The reddish light from Antares continually changes as a
"politician" trying to DECEIVE!!! Scorpius (Scorpio)

***on the evening of Friday, October 31, the Moon lines up near
the bright first magnitude star Antares, the brightest star in the
constellation Scorpius, not far from bright Venus.

..it came SOOO CLEARLY TO ME:

IN BETWEEN WAS HALLOWEEN!!!

***As October turned to November, 2008 on Halloween night, the moon
passed Antares. This was a sign like a baton being handed to a runner -