A MOMENT OF GLOBAL DARKNESS ON DECEMBER 6. 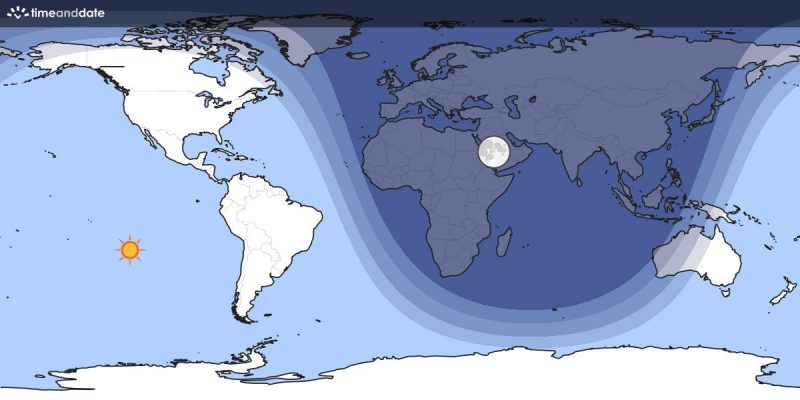 The moment of GLOBAL DARKNESS – for the largest percentage of Earth’s human population – falls at 19:56 UTC on Tuesday, DECEMBER 6, 2022. Surprised? Consider that China and India are Earth’s 2 most heavily populated nations. And both will be in darkness at that time. Meanwhile, the Americas, New Zealand, and most of Australia will be bathed in sunlight. Now consider that North and South America combined only make up about 13% of the global population . - Image via Timeanddate.com

Konstantin Bikos and Graham Jones originally published this article at
Timeanddate.com on DECEMBER 1, 2022. Reprinted here with permission. Edits by EarthSky.

A MOMENT OF GLOBAL DARKNESS

For just a moment on December 6, nearly 9 in 10 people worldwide will simultaneously experience nighttime. A few months ago, our number crunchers fact-checked (and partially confirmed) an internet claim that 99% of the world’s population gets sunlight at 11:15 UTC on July 8. This left us wondering: What about the opposite situation? At what precise instant do most people experience nighttime?
Like last time, we fed our computers with timeanddate’s sun data for 2022 and population data from the Center for International Earth Science Information Network at Columbia University.
We then calculated population data for the day, the night, and the three twilight phases for every minute of every day of the year.

HERE’S WHAT WE FOUND OUT.

DECEMBER 6: MOST PEOPLE IN NIGHTTIME

According to our calculations, the moment of maximum darkness happens at 19:56 UTC on Tuesday, December 6, 2022. At that instant, the sky will be completely dark for about 85.92% of the world’s population. At that moment, night reigns across the three most populous continents: Asia, Africa, and Europe (with very minor exceptions).

HOW CAN IT BE NIGHTTIME FOR ALMOST EVERYONE?

Just like at any other moment, the sun will illuminate one half of the globe at 19:56 UTC on December 6. The other half will be dark, and people living there will experience nighttime.
The reason why so many people will be in darkness is that the world’s most populated areas will be on the night side of Earth at that moment. That includes nearly all of Asia, which is home to about 60% of all humans. Meanwhile, the Americas, New Zealand, and most of Australia will be bathed in sunlight. However, while being huge landmasses, relatively few people live there. North and South America combined only make up about 13% of our worldwide population.

While it’s nighttime for most people on December 6, there is also a case to be made for both December 21 and December 27 as alternative moments of maximum darkness.
You see, our computers spit out December 6 as the result only when we ask them to adhere to the strictest definition of nighttime. This definition says the sun must be at least 18 degrees below the horizon. If the angle is less than 18 degrees, it’s twilight. That’s the time in the morning and in the evening when indirect sunlight brightens the sky to some degree.

The thing is, the darkest of the three twilight phases, astronomical twilight, is hardly discernible from the night. The sun is between 12 and 18 degrees below the horizon during that twilight phase. And the sky is so dark that it feels like nighttime.
When we allowed our algorithms to include astronomical twilight, they calculated 19:39 UTC on Tuesday, December 27, 2022, as the moment of peak darkness.
According to our numbers, 86.11% of the world’s population experiences either nighttime (85.23%) or astronomical twilight (0.88%) at that instant.
That’s roughly 15 million more people compared to the number we calculated for December 6.
Still, it hardly moves the needle on a global scale: The difference accounts for a mere 0.19% of the world’s population.

DECEMBER 21: MOST PEOPLE WITHOUT DIRECT SUNLIGHT

The second alternative instant of peak darkness takes into account all twilight phases, including nautical and civil twilight. During those two phases, the sky is noticeably brighter. However, there’s still no direct sunlight. Applying this loose definition of darkness, we arrived at 21:44 UTC on Wednesday, December 21, 2022, as the moment when most of us are not in the daytime.
We calculated that this affects 88.14% of the world’s population. Nearly 9 out of 10 people on Earth!

Ruben
Re: GLOBAL DARKNESS ON DECEMBER 6 !!! 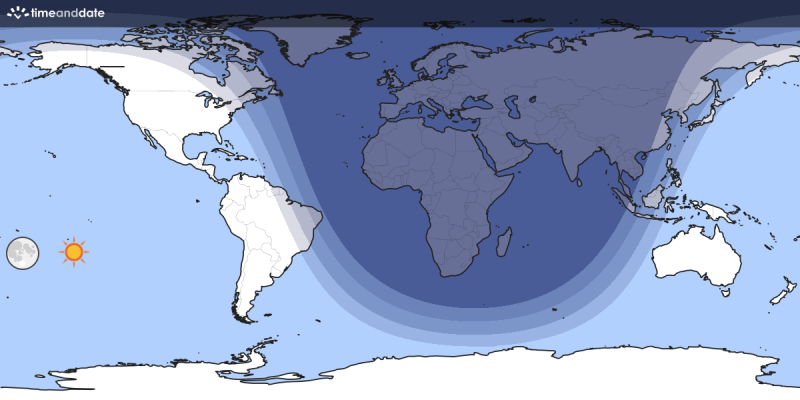 When taking into account NOT JUST NIGHTTIME BUT ALL PHASES OF TWILIGHT, 21:44 UTC on DECEMBER 21, 2022, puts 88.14% of the world’s population in DARKNESS. Note also THE MOON IS NEAR NEW PHASE and won’t add much light to the night. - Image via Timeanddate.com

WHAT’S SO SPECIAL ABOUT THOSE DATES?

We weren’t particularly surprised that all the dates fall in the northern winter. Most people reside north of the equator, and December is the month when the least amount of sunlight reaches the Northern Hemisphere.
But why does the number of people in darkness (or quasi-darkness) peak on those dates?
Why does nighttime affect more people on December 6 than on, say, December 5?
It all depends on how well the shape of the region affected by nighttime and twilight overlaps with the world’s most populated regions. That shape changes very slightly from one day to another as the sun moves southward before the December solstice and northward again after the solstice.
On the dates we found, it simply matches the contours of the world’s population centers slightly better than on the day before or after.
But again, the difference is very, very small. Case in point: According to our calculations, the number of people experiencing night at 19:56 UTC on December 6 is 6,665,450,571; precisely 24 hours earlier, it’s 6,665,326,866. That’s a difference of 123,705 people, a tiny margin on a global scale.

As for the time of day when most people experience darkness, it’s basically when Asia, Africa and Europe are on the night side of Earth.
During that time of the year, that happens every day at 19-something UTC. That’s when night has just fallen in Europe. It’s also when the first sun rays of the new day have not yet reached the far east of Asia.
That said, you probably noticed that the time we calculated for December 21 (21:44 UTC) falls out of line. That’s because the inclusion of nautical and civil twilight makes for a larger geographical area. An area that now stretches all the way from Japan in the east to some of North America’s most populous metropolitan areas, such as New York and Montreal, in the west.
As you can see in the screenshots of our Day and Night Map, it is only when including the two brightest twilight phases that any significant portion of North America’s population joins the “dark side.”

WHEREVER YOU ARE, ENJOY THE DARK SKIES!

If this sounds too gloomy and can’t wait for days to get longer again, let us sweeten the deal.
Look at how much dark skies have to offer during that time of the year.
If the weather plays along, wrap up warm and go outside to enjoy the spectacular GEMINIDS METEOR SHOWER. At its peak on December 14-15, we expect about 150 shooting stars per hour.
A few days later, on December 22-23, the URSIDS METEOR SHOWER peaks, bringing us about ten meteors per hour.
And while waiting for the shooting stars to flit across the sky, you can use our Night Sky Map to spot planets and stars. Also, find more stargazing events in EarthSky’s Night Sky Guide.

TAKE IT WITH A GRAIN OF SALT

While we’re confident in our calculations and data sets, determining how many people experience nighttime at any one moment is a rather messy business.
For one, the world’s population isn’t static. It changes over time, and in some locations, it does so at a different pace than in others. We based our calculations on the latest reliable population data we could find, but they are from 2020.
What’s more, the margins are minuscule. While our algorithms identified a specific instant when most people experience night, they also gave us plenty of other dates and times during the Northern Hemisphere winter with a nighttime population that is just a tiny fraction smaller. We’re talking a few tens of thousands of people. Peanuts compared to the world’s population.

On DECEMBER 6, THE LARGEST PERCENTAGE OF THE HUMAN POPULATION sees a moment of GLOBAL DARKNESS.