"Cowboy Jack" is the name and country music is the game for one Vista resident.

Jack Johnson performs five to seven nights a week in his five different bands: the North County Cowboys; Paniola Jack; The Hank Show, in which he revives the act of Hank Williams Sr.; and the Band in Black, his tribute to Johnny Cash. He also performs solo as Cowboy Jack.

The busy UC San Diego graduate studied sociology and said that it helped him with his music career.

"I did my thesis on the most popular country songs. I used the research that I did in my shows and my music," Johnson said in a recent telephone interview.. "Sociology is the study of people, who I work with all the time, so it goes hand in hand."

Johnson was born in Honolulu into an army family that moved every two to three years. "Paniola" is a Hawaiian term for cowboy, and when Johnson plays as Paniola Jack at various luaus in Hawaii, he covers the music of the late Don Ho.

"Country music is popular in Hawaii. The biggest ranch in the United States is on the Big Island. It's called Parker Ranch," Johnson said. "Also, the Hawaiians introduced the steel guitar to country music."

The Hank Show and the Band in Black incorporate the looks, sounds and types of instruments used by Williams and Cash.

Johnson had a replica of Williams' trademark white suit with black music notes made to wear when he plays with The Hank Show. For the Band in Black, the band dresses in ---- you guessed it ---- all black.

Johnson has clips of him performing with the bands on his website for people to listen to and judge how he compares with the late country legends.

The next Hank Show performance is Saturday at the Pine Hills Lodge in Julian. The band consists of Johnson on lead guitar and vocals, Mike Phillipo on upright bass, David Morgan on steel guitar, Dan Sankey on fiddle and Alec James as a fellow lead guitarist.

Johnson said his musician lineup changes from time to time. He has about 10 to 15 musicians who switch around and cover for each other.

"It just depends on who is available that day," he said.

The Hank Show is not new to the Pine Hills Lodge. Johnson estimated that they have played more than 10 shows there over the years.

The show consists of a barbecue dinner, a dance floor for the guests, a biographical slide show of Williams' life and a two-hour set by the Hank Show band.

"All ages are welcome. The lodge is really a family environment. The lodge's maximum capacity is 120, and we're hoping to fill that," Johnson said.

Out of all of his bands, he said the North County Cowboys is the most requested. They perform a mixture of traditional and vintage country music, including that of Williams and Cash.

Do not expect to catch him listening to the modern country music radio stations.

As for his next venture, he plans to start a new tribute band. 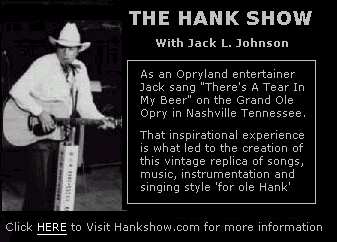