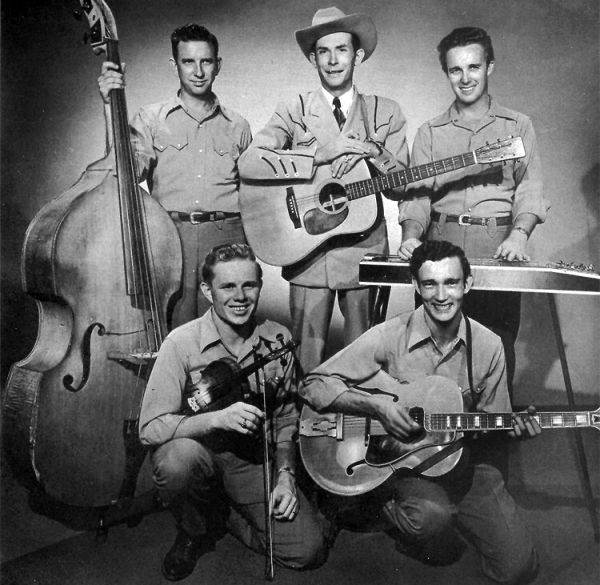 It’s a strange feeling seeing someone you’ve personally known being portrayed in a movie.

It’s something I’ve experienced a couple of times — most recently last week when I finally got to watch the Hank Williams biopic, “I Saw the Light.”

In it, English actor Tom Hiddleston portrays the legendary singer and Elizabeth Olsen portrays his first wife, Audrey Williams. Of course, I never met Hank Williams, who died on January 1, 1953 — but I did get acquainted with some individuals later in my life who were closely associated with him. They included the fantastic recording engineer, Bob Sullivan, who worked with Hank both onstage and during morning radio shows on KWKH, home of the Louisiana Hayride.

The Don Helms I met seemed a gentle, well-grounded soul — sort of the counterpart to the wilder, edgier Hank Williams.

Helms started out young in life playing steel guitar with Williams when they were both relative youngsters in 1943 performing back in the rough and tough honky-tonks of Alabama — years before Williams ever made a major label recording or performed on the stages of the Louisiana Hayride or the Grand Ole Opry.

The two parted ways when Helms joined the military in 1945. By the time Helms was discharged in 1947, Williams already had obtained a recording contract, formed another band and started performing as a regular on the Louisiana Hayride.

However, when Williams prepared for his 1949 debut on the Grand Ole Opry, he put together the nucleus of the greatest version ever of The Drifting Cowboys — which included Helms on steel guitar, fiddler Jerry Rivers and guitarist Bob McNett.

That’s the same set of Drifting Cowboys who traveled to McAlester years later as elder statesmen of country music to perform at S. Arch Thompson Auditorium for a tribute concert to Hank. No way was I going to miss this!

I brought along with me the well-worn cover of the first Hank Williams album I ever owned, one I had obtained back in my junior high school days titled “I’m Blue Inside.” The album had a roughly blues-based theme, containing songs such as “Long Gone Lonesome Blues,” “The Blues Come Around,” “Moanin’ the Blues” and “Lovesick Blues.” It even included some songs without the “blues” in the title, but still followed the theme: “I’m So Lonesome I Could Cry” and “Alone and Forsaken.” Yikes! It sounds like a thoroughly depressing album, but it wasn’t. I listened to it for hours — amazed that a singer and songwriter could plow the emotional depths like Hank Williams.

The recordings included a magic beyond Hank’s enduring songs and voice, though — and one of the key ingredients was the amazing steel guitar playing they contained.

Don Helms didn’t play steel guitar on every Hank Williams recording — but he played on a lot of them, including some of the best, such as “Cold, Cold Heart,” “I Can’t Help It (If I’m still in Love with You)” “I’m So Lonesome I Could Cry,” “Your Cheatin’ Heart,” “Hey Good Lookin’” and “Jambalaya,” to name a few.

I don’t remember the name of the bassist, drummer and singer who performed with The Drifting Cowboys at S. Arch Thompson Auditorium that night in McAlester. The bassist hadn’t been one of the original Drifting Cowboys and of course, Hank never used a drummer. That drum-like sound heard on many of his recordings is actually the sound of a guitarist “damping” or “deadening” the strings, usually made by a guitarist laying the palm of his picking hand across the strings immediately after striking them to produce a percussive effect.

The singer, who thankfully didn’t try to imitate Hank that night did a serviceable job, coming from the Tommy Duncan-Ray Price school of vocalists. The real thrill for me though, lay in hearing Helms, Rivers and McNett interact. Hank Williams, who passed away years before anyone from my generation could have bought his records, already seemed like an almost mythological character to me. I could hardly believe I was sitting there, listening to three of the members of his band, right here in McAlester inside S. Arch Thompson Auditorium — the same ones who had performed with him onstage at his 1949 Grand Ole Opry debut!

After a fantastic concert I went backstage. I wasn’t going to miss this chance to go to the source. Who knows why people “hit it off” with one person and not another? While Rivers and McNett were polite and friendly, I felt an immediate kinship with Don Helms. Maybe he could sense my intensity at trying to divine the mojo behind the band’s recordings with Hank Williams.

I could not have been more intent if I’d had an opportunity to talk with Leonardo da Vinci about painting the Mona Lisa, or if I had a chance to ask William Shakespeare about writing “Hamlet” — such is my esteem for the music created by Hank Williams and his band of Drifting Cowboys.

Recording studios of today have the capability of recording and dubbing hundreds of tracks. Why can’t they capture the “feel” that Hank and The Drifting Cowboys did in the late 1940s and early 1950s, often working in studios limited to one or two tracks?

Helms, a modest man, did not have a definitive answer, but he did provide some insight.

“Some of those studios we worked in were about the size of motel rooms,” Helms said. During some of the performances, there were times they ran the vocal microphones through guitar amplifiers, he said, because they did not have a PA system available to use exclusively for the vocals.

I took his answer to mean that Hank Williams and The Drifting Cowboys didn’t rely on technology to produce their unique sound. It came from the heart. Musicians gathered around the singer and they recorded everything “live” in the studio — so unlike today, when instruments are often recorded separately a track at a time, and everything is mixed together later. Many times, with the availability of hundreds of tracks and the capability to “fix” every nuance, everything comes out sounding perfect — perfectly sterile, that is.

I also wanted to know if there was any truth behind some of the Hank Williams legends.

Did Hank really ever smash his guitar over somebody’s head during a honky-tonk brawl?

Yes, he really did, especially in the early days, Helms said, with the hint of a smile at the memory of some long-ago Alabama honky-tonk smashup.

But the thing that really floored me occurred when I mentioned to Helms that while many of Hanks’ songs touched on the blues, a few even had a jazzy feel to them — such as “Lovesick Blues,” for example.

Helms told me how much Hank liked the blues — no surprise there — but then he said Hank also loved jazz. Back in the Alabama honky-tonks, where he and Hank were getting started, they sometimes had horn players in the band, Helms told me.

“Get out of town!” I said. “You’re kidding me, right?” Helms assured me he was perfectly serious. Hank would have liked to have used horns throughout his career, but that would never have been allowed by the Grand Ole Opry, Helms said.

In retrospect, Helms comments about Williams’ love of jazz and horns doesn’t seem so unusual. After all, “Lovesick Blues” was an old vaudeville, show tune, dating back to the 1920s. Both Hank and jazz great Louis Armstrong recorded “My Buckets Got a Hole in It.” Helms always cited his main inspiration on steel guitar as Leon McAulliffe, the steel guitar virtuoso with Bob Wills and His Texas Playboys — a group which often used horns and incorporated jazz, blues and country music elements into the musical gumbo known as Western swing.

A few years ago, a newly-discovered home-recording surfaced of a 14-year-old Hank Williams singing a medley of the blues song “Fan It” coupled with the Irving Berlin song, “Alexander’s Ragtime Band.” He also recorded “St. Louis Blues” as a teenager — not exactly your typical country music fare.

As we ended our conversation in McAlester that night, Helms issued an invitation that’s not unusual for this part of the country, to come and visit him sometime.

“If you and your family are ever in Nashville,” he said, “come and see me.”

“You bet,” I answered, not thinking it was really a serious invitation — but what Helms did next proved to me he meant what he said. He asked for a piece of paper from one of my ubiquitous yellow tablets. Then, borrowing a pen, he jotted something down on it.

“There’s my home number,” he said. “If ya’ll ever get to Nashville, give me a call.”

I never did make it to Nashville while Helms was still living, but if I had, I would have definitely made that phone call. He seemed like the kind of genuine guy who would invite you inside for a piece of apple pie and a glass of iced tea and a little conversation about some of the greatest recorded music of all time — although he would never have called it that.

Speaking of Helms’ legacy, country singer Marty Stuart expressed it very well when he said “The sound of his steel guitar is as much a part of our atmosphere as the wind, trains or church bells.”

Helms didn’t quit playing or recording after Hank Williams died. In addition to their timeless work together, his distinctive steel guitar sound can be heard on Patsy Clines’ “Walkin’ After Midnight” and Ray Price’s “I’ll Be There.” He’s also the steel guitarist on Loretta Lynn’s “Blue Kentucky Girl” and Lefty Frizzell’s “Long Black Veil.”

Helms, who died in 2008 in Nashville, played up until the end, even recording with Kid Rock.

“Don Helms’ legacy will not only be as one of the founding fathers of country music, but also as one of the truest gentlemen to ever walk the face of the earth,” Stuart said.