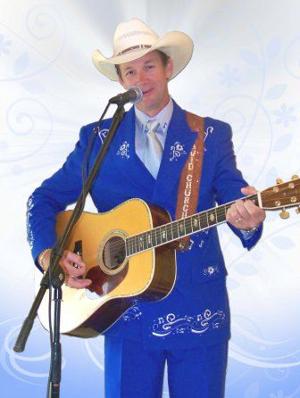 If you love traditional Country Music, rhinestones and Honky Tonk, there’s
a show coming to Kerrville that you don’t want to miss. RFD-TV’s
“most requested” country music artist, David Church is returning to the
Cailloux Theater, Kerrville, Texas with special guest Terri Lisa on
Feb. 11.

Church was last at The Cailloux in 2015, when his audience gave him two
standing ovations. If you were here, you know that his music evokes an
earlier time in the Country Music tradition. If not, you’ll love his
traditional Country sound.

This all-new show will feature Church’s tribute to the great
“Hank Williams,” including songs that have not previously been on RFD-TV.
Church will also include some gospel songs from his new gospel CD, “Just
Over On The Other Side,” as well as some traditional classic country and
originals.

Church has gained both national and international acclaim. From his devotion
to the iconic “Hank Williams” to his own “roots/retro” country music, this
Nashville recording artist has made a huge impact on music enthusiasts all
over the world.

The “Star” of RFD-TV's prime-time Sunday Night “Midwest Country” for more
than 12 years, Church, along with his wife, Terri Lisa, have been lighting
up TV sets throughout the US. RFD-TV is recognized as the “fastest growing
TV network in the US, and Church is their "most requested and most popular"
artist. The pair have been featured on other TV networks as well, including
Blue Highways TV, and they have captured the hearts of millions from baby
boomers to college students.

Church’s performances have taken him all over the world. He has performed
as a headliner and on the same stage as many legends of country music and
bluegrass such as Gene Watson, Loretta Lynn, Jeannie Sealy, just to name
a few. He has a long list of awards and accolades from having original
songs in the top 10 of major radio stations and networks, to having
number 1 songs on independent charts.

Both David and Terri Church will be featured in an upcoming book and
documentary DVD, “Behind The Microphone” by the legendary DJ Lew Dobbins.
Dobbins has interviewed, and will include information in the book on,
almost every major country star from the 60’s to recent years.

Dobbins met the Churchs a few years ago, and featured them in an interview
on his local radio show. He later did an hour interview and featured much
of the interview on his international syndicated program. He latest work
will feature an entire chapter on the Churchs. “We were very surprised
and it is an incredible honor to be a part of this historical book,”
Church stated. The book will be released on Feb. 23 and is now available
for pre-order on Amazon.com.

Church is officially recognized as a celebrity by the ROPE organization
in Nashville. (Reunion of Professional Entertainers). He has performed
at ROPE events during the CMA Fest in Nashville right beside many major acts.

You may purchase tickets for this and other shows at the Cailloux Theater
box office by calling 896-9393. Box office hours are:
Monday – Friday, 10 a.m. to 1 p.m. and Saturdays from 10 a.m. to 3 p.m.
The box office is also open 1-1/2 hours before performances. Tickets are
also available online at www.caillouxtheater.com.

For more information on David and Terri Lisa Church, visit their website
at www.davidchurch.net.